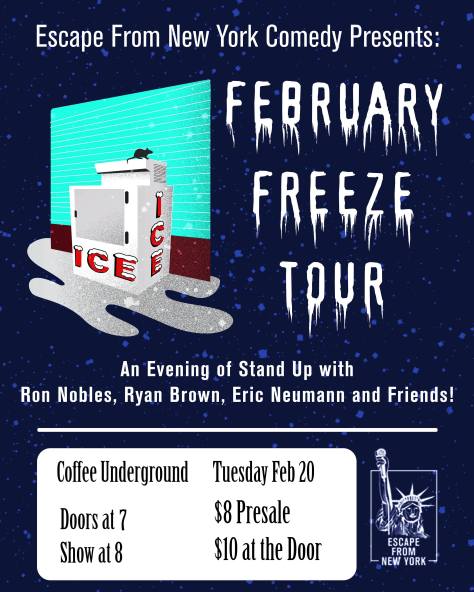 If you’re in need of something to break up the February weekday drag, add this to your calendar. The Escape From New York Comedy Tour is headed to Greenville on Tuesday the 20th. They are performing at Coffee Underground (great little venue).

When Ryan Brown reached out to let me know they were coming to our little corner of the world, I asked “Why Greenville”? Ryan actually has a unique connection to Greenville. Shortly after arriving in NYC, he landed a job as a writer at Greenville-based advertising agency, EP + Co. “That’s what put Greenville on my radar. I traveled there for work a few times and I expected it to be this sleepy little town but it actually had this very unique energy that I wasn’t expecting and I loved it. When we were booking this tour I knew right away that we should do a show there.”

Ryan, Eric and Ron are all based in NYC and while they of course love performing in the city that never sleeps, they also love taking their act on the road to smaller towns and cities. Thus the name “Escape From New York”. Their first tour was in July 2017 and they hit 4 cities in 4 nights. It was a huge success, so they decided to do it again but a little bigger this time.

Doors open at 7 with the show at 8. The pre-sale tickets are just $8 and you can get them here: